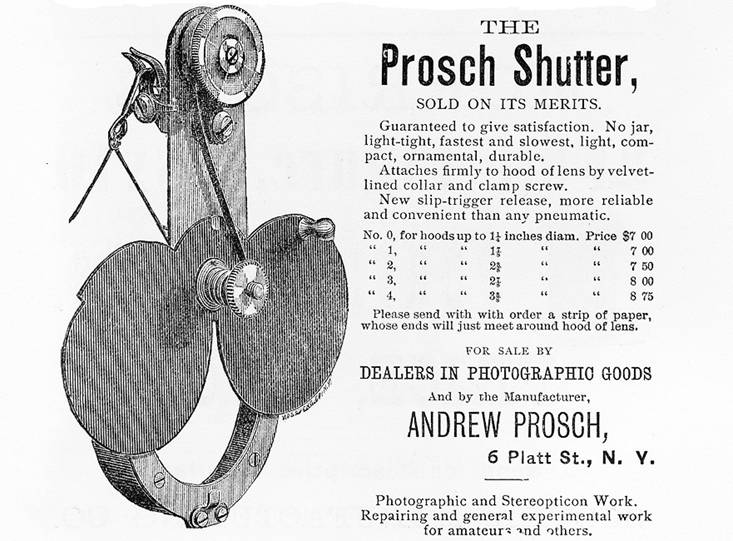 The Prosch Instantaneous Shutter is believed to be the first shutter manufactured under the Prosch family name, having its origins in George W. Prosch (1812-1877) and Andrew Prosch (1816-1897), two brothers who constructed the first daguerreotype camera in America for Samuel F. B. Morse.  Morse is credited with introducing the daguerreotype process here in the U.S., subsequent to a visit to France in 1839, wherein he met Louis Daguerre and became interested in his photographic process.

Prosch, in one of their later ads from 1890, makes a statement to their "First reliable Shutter put on the market (1883)". It's not known whether this first shutter is in reference to the Instantaneous, the Champion or some other unknown Prosch model.  An advertisement for the Prosch Instantaneous Shutter appears in Scovill's The Photographic Times and American Photographer, Volume XIV, No. 158, February, 1884.  Some ads, like the one shown above, referred to it simply as "The Prosch Shutter". The Instantaneous would later evolve into the "Eclipse" Shutter, introduced in late 1884 or early 1885.

Andrew Prosch is listed as a "Microscopic and Photographic Instrument Maker, 150 Chatham Street, New York, manufacturer of Microscopes and New and Improved Magic Lanterns and Stereopticons" in Trow's New York City Directory for 1872.

Although Andrew Prosch's nephew Cyrus Prosch was granted Patent No. 312,581 on February 17, 1885 for the Instantaneous Shutter's design, it was actually manufactured by Andrew Prosch.  The Instantaneous was also sold by E. & H.T. Anthony & Company, to whom the patent was assigned:

Per an excerpt in Anthony's Photographic Bulletin for May 22, 1886, George Prosch also gave Abraham Bogardus his first lessons in making a daguerreotype.  Bogardus began operations in November of 1846. George and Andrew Prosch also manufactured and supplied a variety of photographic goods and apparatus to the E. & H.T. Anthony & Company.

After George Prosch's death on August 27, 1877, Andrew Prosch remained in business.  Based on advertisements and addresses found in Trow's New York City Directories from the 1860's and early 1870's, Andrew Prosch was apparently operating independently of his brother since at least 1863.

Reference has been found to an obituary for Andrew Prosch, with a residence at 36 Platt Street, New York.  This 36 Platt Street address is found in advertisements and on some of the earliest versions of Cyrus Prosch's Duplex Shutter.  Cyrus N. Prosch (1849-1920), son of George Prosch, and nephew to Andrew Prosch, would perpetuate the family's business.  Subsequent to Cyrus Prosch's name appearing on some examples of the "Eclipse" Shutter and the earliest versions of the Duplex, shutters would bear the "Prosch Mfg. Co." name going forward. It should be noted that not all Prosch shutters are marked, some being seen with no company name, serial numbers or patent dates.  As of 1917, the Prosch company was still in business manufacturing flashlights.

The Instantaneous is a very rare shutter, given its brief production run and that relatively few were built.  Although a handful probably exist, I know of only one example in a private collection.