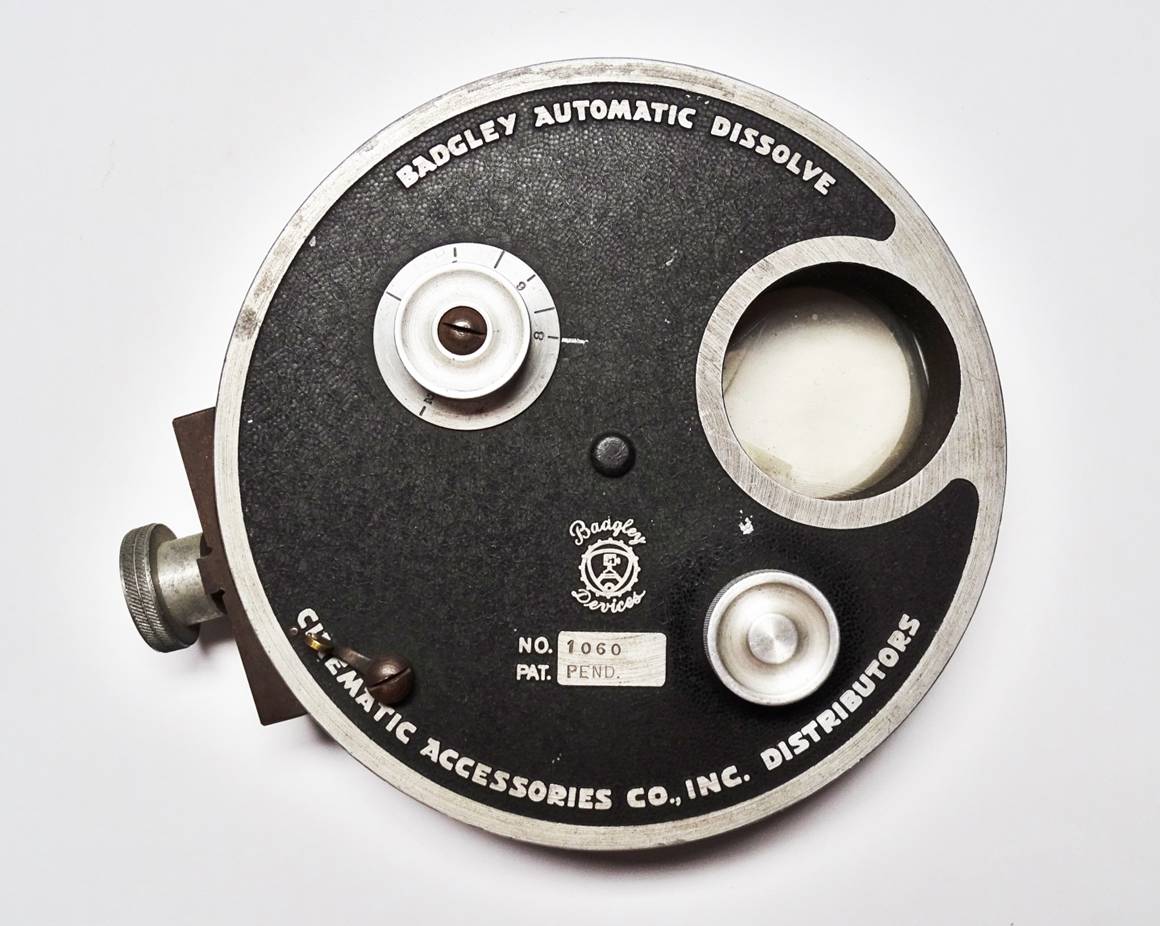 The Badgley Automatic Dissolve was the brainchild of Gerald J. Badgley (1885-1983), residing in New Rochelle, New York from at least 1914-1919.  Coincidently, from 1918-1922, New Rochelle was also home to the Wilart Instrument Company, makers of professional motion picture cameras and equipment.

During the early part of the 20th Century, Gerald J. Badgley was a cameraman for the Centaur Film Company, later being associated with the Thanhouser Company as a mechanic and electrician. A self-proclaimed "expert mechanician" according to one of his advertisements, Badgley held at least nine photographic patents for improvements to motion picture and television equipment.

According to the Thanhouser website www.thanhouser.org, Thanhouser cameraman Lawrence E. Williams in or shortly after 1914,  was the first to use a stereoscopic system perfected by Gerald Badgley.  Badgley was the father of Helen Badgley, named the "Thanhouser Kidlet" as a result of more than 100 roles as a child actress.

Badgley reportedly developed a "moving picture recorder" and an amateur camera, both of which were named "Vista".  Further research is needed to ascertain exactly what type of recorder (presumably sound) and whether the Vista amateur camera ever reached production.  Reference has been found where Badgley received an order for 500 cameras, but I've never seen an example. The website Cinematographica does reference a Vista 16mm camera by J.H. Hallberg, USA.  Hallberg, a Swedish electrical engineer who marketed motion picture equipment and supplies during the early teens, specialized in the electrical end of the business.  Maybe he had a connection with Badgley through a shared electrical background and they collaborated on the Vista camera or recorder, but this is only speculation.

Before 1919, most motion picture cameras were not equipped with dissolving shutters and relied on the use of the lens' iris to perform a fade-in or fade-out.  However, since most iris' when stopped down still left a small opening, complete fade-ins or fade-outs were not possible.

It's unknown when Badgley's Automatic Dissolve was first introduced to the market, but Cinema News Volume 3, No. 2, May, 1919, took note of Badgley's appointment to Chief Engineer of the new Cinematographic Division of General Laboratories, stating that he had introduced the automatic dissolving shutter to the motion picture world and had been engaged in the designing and building of cameras since 1901.   It went on to state that Badgley's new department will be used for conducting experiments, for making all types of mechanical repairs and for the installation in cameras of the automatic shutter and the new "cartoon" device.

The foregoing seems to infer, that in the beginning some level of machine work and fitting was required to install this feature, which if so, was probably integrated with the camera's existing shutter.

The Badgley Automatic Dissolve functioned through a grid work of vertical lines on a rotating acetate disc.  As the disc rotated, the density of the lines increased to fade-to-black or decreased to fade-to-light, as desired by the cameraman.  The knob directly below the lens opening tensioned the spring for the motor, while the upper knob with graduations set the speed of rotation.

This example is marked with a serial number, and "Pat. Pend.", although a patent covering the Automatic Dissolve's design is yet to be found.  The unit is well constructed, with a screw clamp to facilitate quick attachment to the front of the lens barrel.  It has what appears to be an auxiliary mount, most likely for providing a more secure attachment to the camera or possibly to attach other accessories.  This unit is speculated to be a later and more advanced model, requiring no special machining for attachment.

A Badgley Automatic was offered for sale in a Conway Camera Company, Chicago advertisement, in Popular Photography for January,1944.  In all probability this was a used unit, as by this time most professional cameras already had this capability.

No information has yet been found for the business entities "Badgley Devices" or "Cinematic Accessories Co., Inc. Distributors", that would help in narrowing the timeline for this unit's manufacture.  No other advertisements have been found for Badgley's work, and this is the only example I have run across.

Badgley's Automatic Dissolve is a great example of one those unique (and now obscure) technical advancements, seemingly lost forever until someone just happens to come across one. 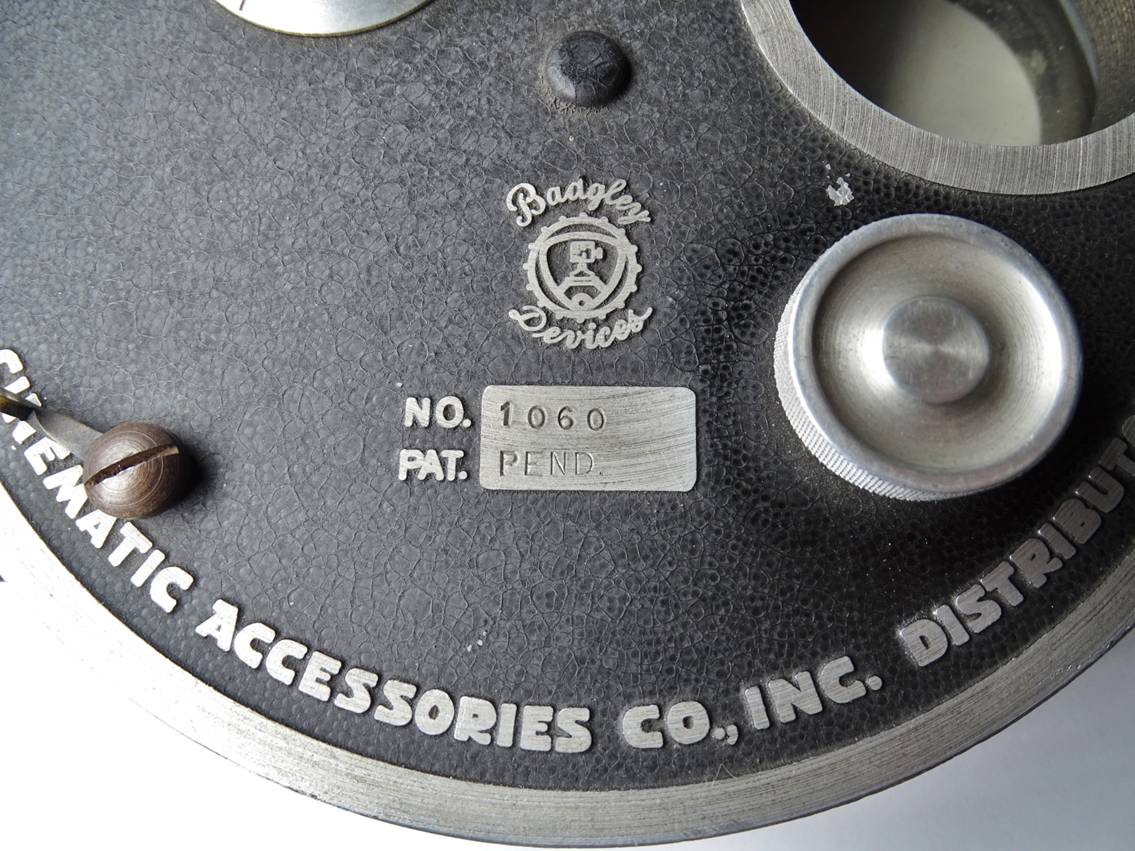 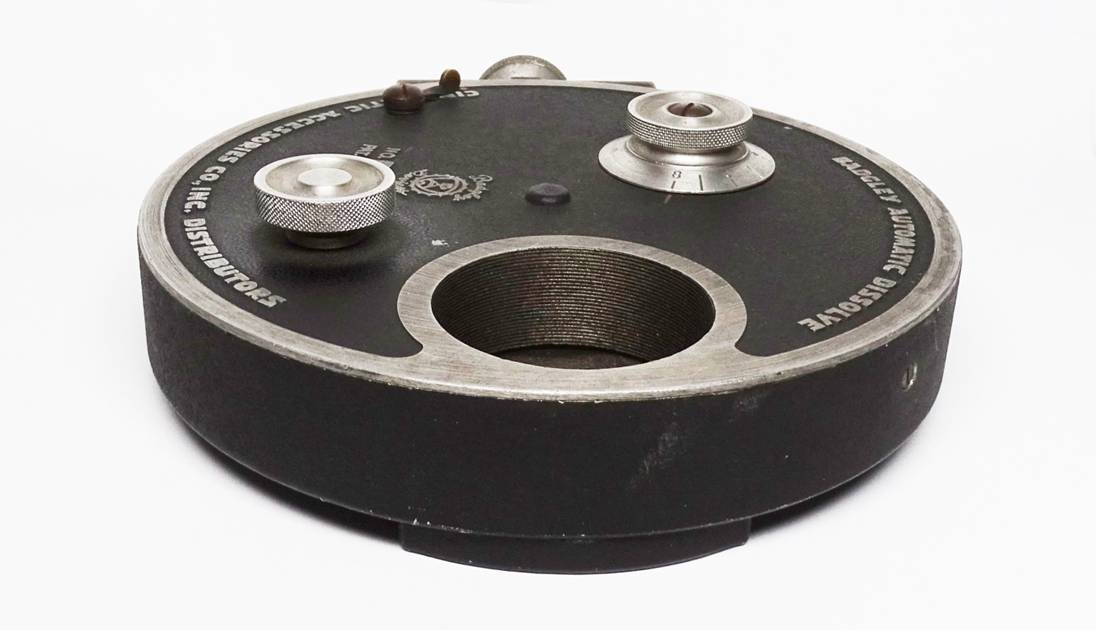 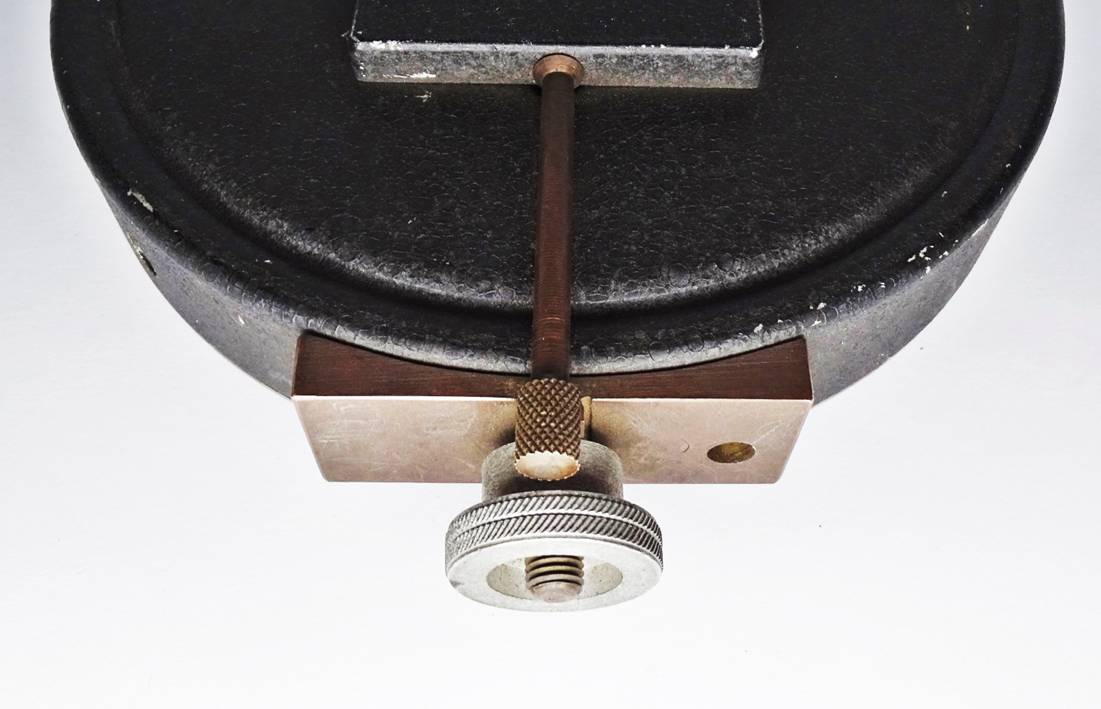