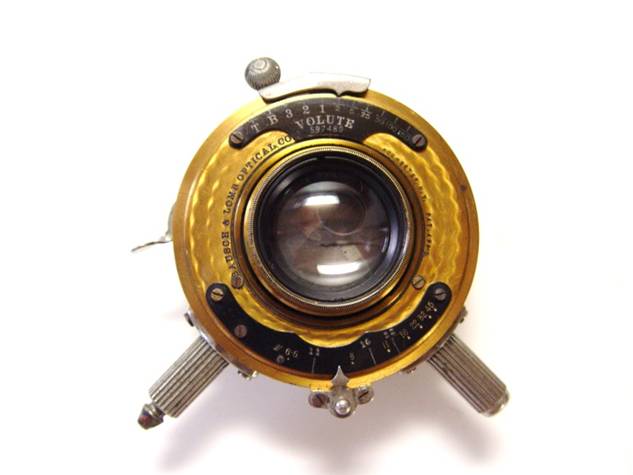 The Volute, designed by Theodor Brueck in 1902, was patented June 7, 1904, Patent No. 761,756 and assigned to Bausch & Lomb Optical Company. Beautifully constructed and with a speed range of 1/150th of a second to three seconds, the Volute represented state-of-the-art. The shutter appeared in 1902, in both the Rochester Optical Company's Premo Cameras catalogue and Rochester Camera and Supply Company's  Poco Cameras catalogue.  With the patent not yet acquired, the earliest examples will have "PAT APP'D" markings.

Between 1903 and 1905,  Brueck was granted at least six patents, covering designs for the Volute, Argos, Gem and Victor shutters.  All the patents were assigned to Bausch & Lomb where Brueck was employed as a designer.  In 1910, Brueck and Rudolph Klein, another former Bausch & Lomb designer, left to form the XL Manufacturing Company.  Because the XL name was similar to C.P. Goerz's "X excel L" Shutter, the company's name was changed to Ilex Optical Company.  Brueck and Klein continued to patent shutter designs that were assigned to Morris Rosenbloom who was a financial partner in the new start-up, or to the Ilex Optical Company itself.

By 1920, the only shutter offered in Bausch & Lomb's catalogue was the Volute.  It was still being manufactured as late as 1925, offered in Central Camera Company's Catalogue No. 27 of Cameras, Kodaks, Lenses and Photographic Accessories, 1925-1926.  Its production lasted about twenty-four years, a record run for any previous or future Bausch & Lomb shutter, eclipsing the model runs for the Iris Diaphragm (1891) and the Unicum (1897), two their most popular shutters.  The Volute was deemed Bausch & Lomb's "finest shutter" by Dr. Rudolf Kingslake.

Two versions of the Volute were available in three sizes.  The early version had a gold lacquered finish and has been referred to as the "Golden Volute".  Later versions with a silver or aluminum finish and are known simply as the "Volute".

The Volute was redesigned under Patent No. 798,595 dated September 5, 1905, with a simpler but equally reliable mechanism.  The speed markings were now in reverse order and the shutter continued to be available in three sizes.

Despite its longevity, the Volute's price was considerably higher than Bausch & Lomb's Iris Diaphragm and Unicum models.  In 1902, in the 4x5 size, the Volute was offered at $17 compared with the Iris Diaphragm at $12 and the Unicum at $6.  As a result, the Volute is seen with much less frequency today. 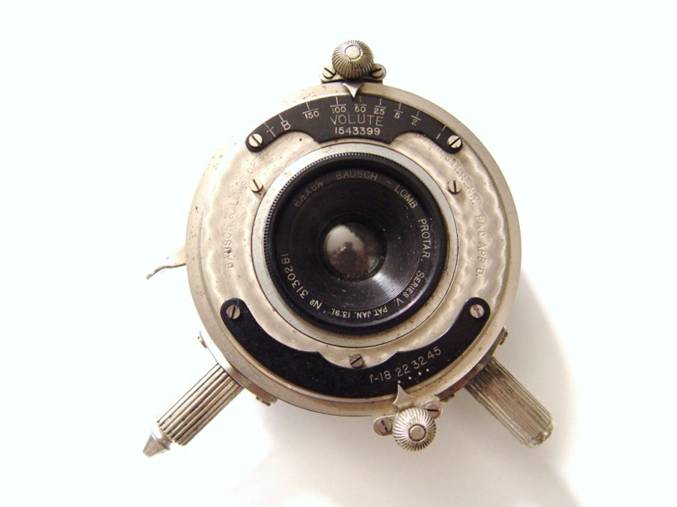