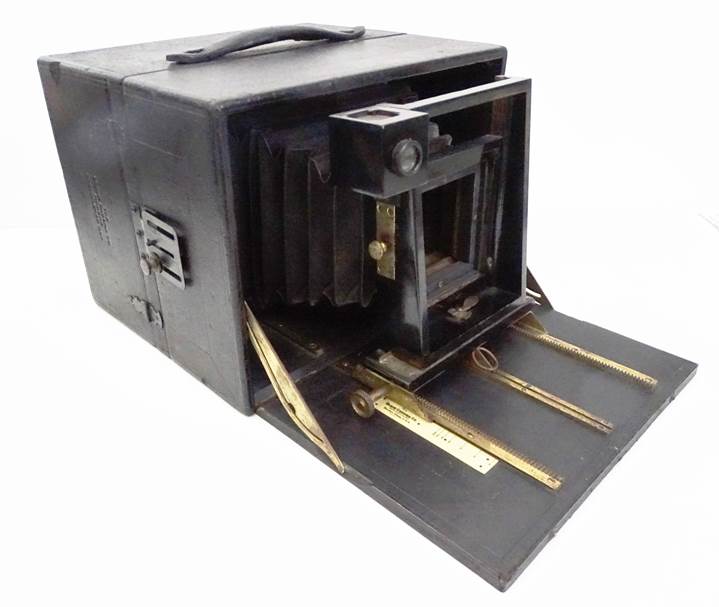 Introduced by 1893, the Century Hawk-Eye, 6-1/2 x 8-1/2, Folding can be found in Blair's Illustrated Catalogue of Blair's Hand Cameras and Films  for that year.  Like the 5x7 Folding Hawk-Eye No. 1 and Folding Hawk-Eye, No. 2, the Century Hawk-Eye, 6-1/2 x 8-1/2, Folding was capable of holding three of Blair's Feather-Weight Holders or a roll holder.  It was the largest format offered in Blair's Folding Hawk-Eye series. Uniquely equipped with an Aluminum Bausch & Lomb Iris Diaphragm Shutter and priced at $100, it was also the most expensive in the series.

With the exception of its last believed iteration (1898), catalogue references for the Century Hawk-Eye, 6-1/2 x 8-1/2, Folding had no engravings.  But, per the description, they were identical to the No. 2, 5x7, Folding model except that the door opening to access the holders or roll holder was on the side instead of the top.  Other than the size difference due to the larger format and the Aluminum Iris Diaphragm Shutter, they were almost identical.  A few possible differences not mentioned in Blair's catalogues, is that the Century Hawk-Eye's bed was leather-covered (as on the example shown here) instead of the French-polished ebony finish generally found on the No. 1 and No. 2 models.  I say generally, since in the case of the Folding Hawk-Eye, 5x7, No. 2, examples have been seen with both leather-covered and ebony finished beds.  Another Century example in the collection has the leather-covered bed as well, suggesting this may have been standard for the model.  Also, the rear door panel on the Century is hinged rather than spring-tensioned as found on the No. 1 and No. 2 models.

Very few examples of the Century Hawk-Eye, 6-1/2 x 8-1/2, Folding have surfaced, making it much more difficult to acquire than the Folding Hawk-Eye No. 1 or No. 2. 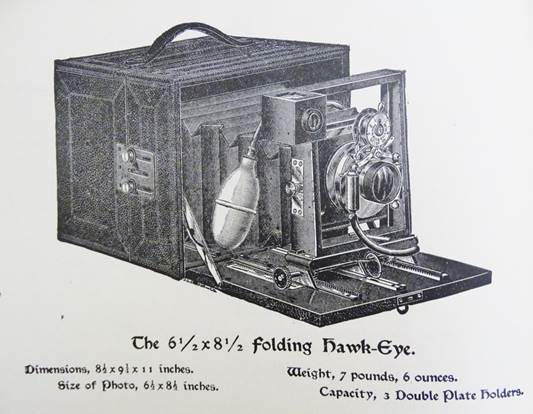 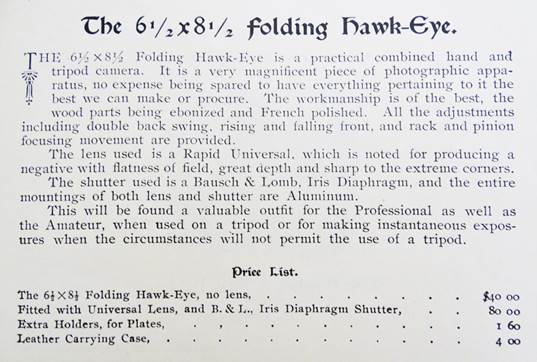 Engraving and listing from Blair's Catalogue of Hawk-Eye Cameras and Photographic Supplies, Season of 1898 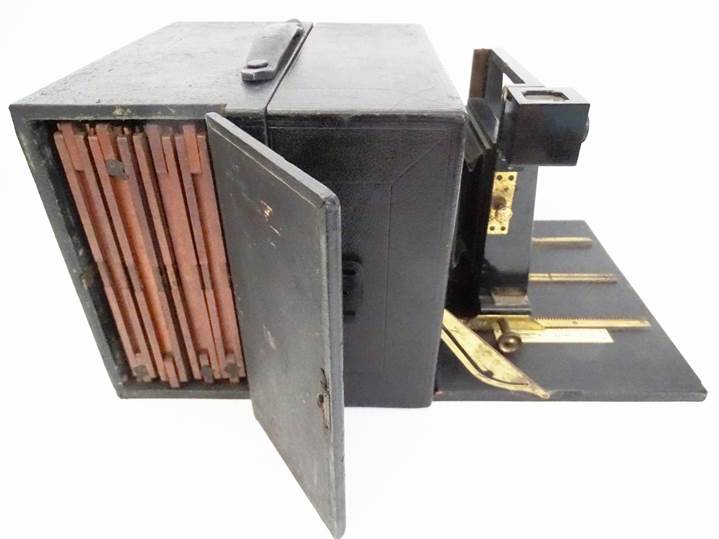