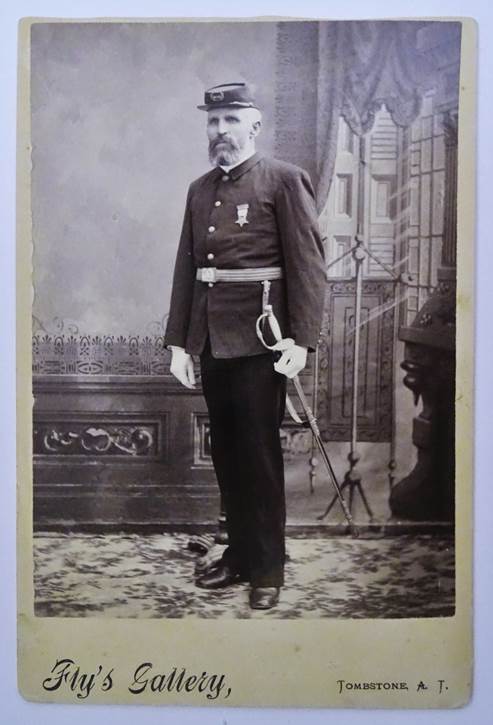 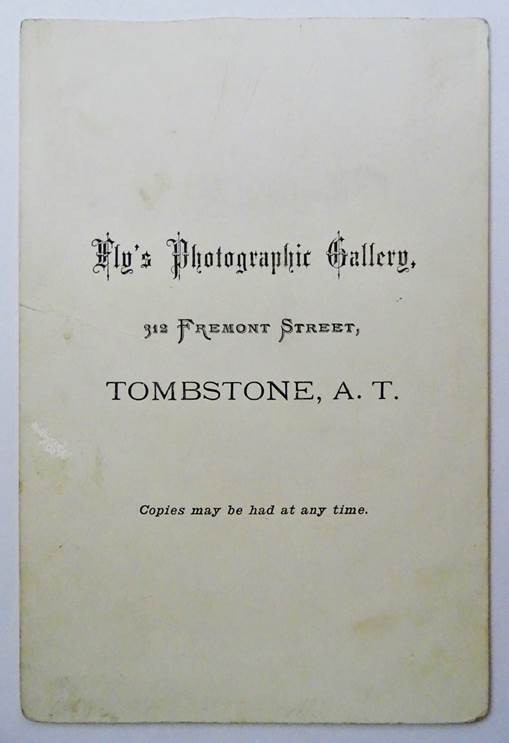 Although unmarked, this cabinet card of a gentleman in a Civil War GAR (Grand Army of the Republic) uniform with a sword and medal is believed to be B.A. Fickas.

At the time of its acquisition, this cabinet card originated from the B.A. Fickas collection of Tombstone and Arizona Territory photos, documents and ephemera.  It was accompanied by information stating that B.A. Fickas was a prominent figure in Tombstone and Territorial Arizona as an entrepreneur, businessman, newspaperman and public servant. He relocated from San Diego to Tombstone, A.T. in 1878, ran for mayor of Tombstone in January of 1880 and was narrowly defeated. While in Tombstone, Fickas served as a member of the Eleventh Territorial Legislature, where he was instrumental in the formation of Cochise County, and later serving as Clerk of the Cochise County District Court. He was the first Grand Chancellor of the Knights of Pythias of Arizona and served as Commander of Tombstone's Burnside Post, Grand Army of the Republic in 1882.

He relocated to Phoenix in 1887 where he served as Maricopa County Undersheriff from 1888 to 1889. He also served as President of the Phoenix School Board, as Democratic Central Committee Chairman and as Phoenix City Councilman, Third Ward from 1899-1901.

Photographer Camillus Sydney "Buck" Fly of Tombstone, was present during the gunfight at the O.K. Corral. His studio was located adjacent to where the shooting occurred. Witnessing the event, Fly became a de facto participant, as he is said to have disarmed Billy Clanton after the firing ceased.  Fly is credited with taking the famous photo of Tom McLaury, Frank McLaury and Billy Clanton, shown lying in their coffins.

Fly, who billed himself as a" portrait and landscape photographer", photographed many prominent local residents.  He is better known, however, for his photographs of Native Americans, and the typography and mining activity surrounding Tombstone and nearby Bisbee, Arizona.  Fly's wife, Mary E. "Mollie" Fly, was also a photographer, running the Tombstone studio during those periods when C.S. was away.  In 1893, Fly briefly operated another studio in Phoenix, Arizona, for about a year. His photographic career lasted from 1880 until his death in 1901 at age 52, in Bisbee.  ”Mollie" Fly continued to run their Tombstone studio for ten years after her husband's death, finally retiring in 1912.  The studio burned down in 1915, and today, a replica of the building stands in its place.

Images made by Fly (and/or his wife) have been found with the names "C.S. Fly", "Fly's Gallery" and "Fly's Photographic Gallery".

Fly's images are not seen very often, and are prized, irrespective of the subject matter.  Collectively, they represent a great historical period as the Old West was disappearing.   Fly's connection to the O.K. Corral, is largely responsible for much of his popularity today.  But in all fairness, he left a considerable photographic record on several fronts, providing a glimpse into an important and colorful period in our history.