Charles H. Scofield is best known for his Unique portable camera, a self-contained unit with its bellows being stored within the box that became its base, when attached to the track on the box's exterior.  Patent No. 329,599 was filed by C.H. Scofield on February 25, 1884 and issued November 3, 1885 for an “adjustable camera and box combined.”   Based on three advertisements that appeared over fifteen months and a few known examples, it was most likely made in extremely limited numbers for less than two years.

Prior to the Unique camera, Scofield designed a camera shutter under Patent No. 269,472 issued on December 19, 1882.  Production information is unknown and no advertisements have been found, but Scofield’s Shutter was described in The American Amateur Photographer, Volume II, March, 1890, as being “operated by inflating a large rubber tube resting on a wire, is a novel yet simple idea.  The round disk is very light and slides vertically over the smooth face of the lens plate. In its normal position, the shutter is closed, but when the bulb is compressed, the rubber tube connected to the disk is inflated, which, in bearing on the wire over which it folds, acts as a fulcrum and raises the disk".  It's interesting to note that although the patent was granted in late 1882, the first mention of the shutter doesn't occur until early 1890.

Charles H. (Henry) Scofield was a photographer operating studios in Utica, New York, who traveled to Cherry Valley, New York, Turner's Falls, Massachusetts and New Berlin, New York.  Based on advertisements, city directories, surviving stereo views, carte-de-visites and cabinet cards, Scofield is known to have been active between the mid-1860's through 1910.  A prolific businessman with an inventive mind, Scofield also patented a picture trimming device, a dry plate holder, an automatic gas cock and a peanut vending machine. He may also have been a machinist and toy manufacturer for a brief period, prior to becoming a photographer.  In 1890, he marketed the Scofield Burnisher through Robert Aucock's Photographic Apparatus and Supplies company located in Utica.  Scofield also operated a restaurant and bakery in Cherry Valley, New York during the early 1900's, alongside his photographic enterprise.

With Scofield's Unique camera having been manufactured by Scovill Manufacturing's New Haven Camera Works, it's entirely possible that Scovill could have built Scofield's shutter, as well.  If it ever was produced, whether by Scovill or Scofield himself, it would have been made in very few numbers as no examples are known to exist. 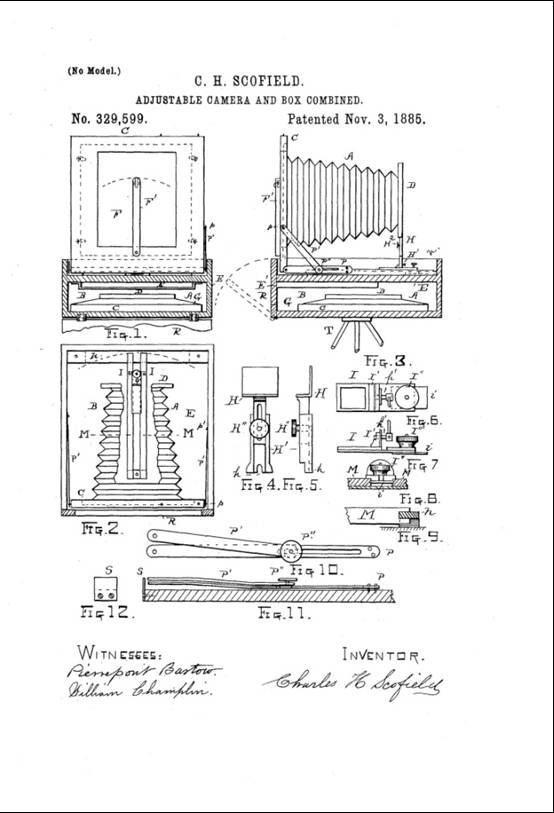 From The Philadelphia Photographer, 1884