Engraving from The American Amateur Photographer 1901

Initial research concluded that this camera was never produced, possibly due to the declining popularity of magazine cameras during this period.  However, the camera is referred to in the American Amateur Photographer, Volume 13, April 1901, article on "Hand Cameras of 1901".  The article is introductory in nature, outlining various offerings from different manufacturers.  Capable of holding 12 plates, it could easily make exposures in as many seconds via a handle that pulled each plate into position.  It further stated the camera was equipped with a Wollensak instantaneous shutter, mounted on a rising and sliding front.

The existence of this design and other Conley patents were uncovered during a general patent search.  The Conley Folding Magazine Camera was designed by Charles Calvin Henderson (1868-1942) of Spring Valley, Minnesota, Patent No. 680,203 dated August 6, 1901, and assigned to the Conley Camera Company.  Henderson is also credited with inventing Conley's Silent Shutter, although patents for the design were granted to Fred V. and Kerry E. Conley (No. 732,175, June 30, 1903, No. 739,834, September 29, 1903) wherein a pair of shutter leaves are carried on rotating shafts and fold together as to overlap.  The camera's patent  is also mentioned in David N. Sterling's  article "Photographs to Phonographs, The Conley Story" published in the Photographic  Collector's  Newsletter, Volume III, No. 4, June, 1975. According to Sterling, Henderson came to Spring Valley in 1895, and was employed as a machinist at Conley which built a factory there in 1899.  Conley would later relocate to Rochester, Minnesota in June,1904.

If in fact Conley's Folding Magazine Camera ever reached production, very few would have been made.  I'm not aware of any examples, but if one ever surfaces, it would be a great find! 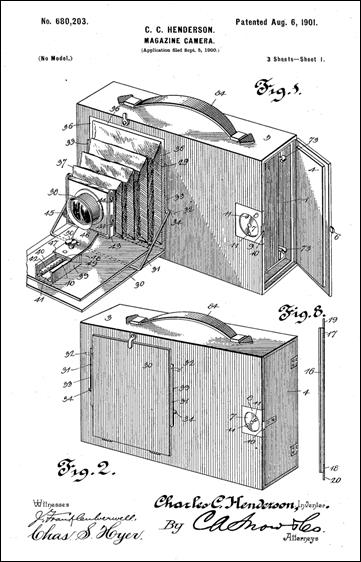