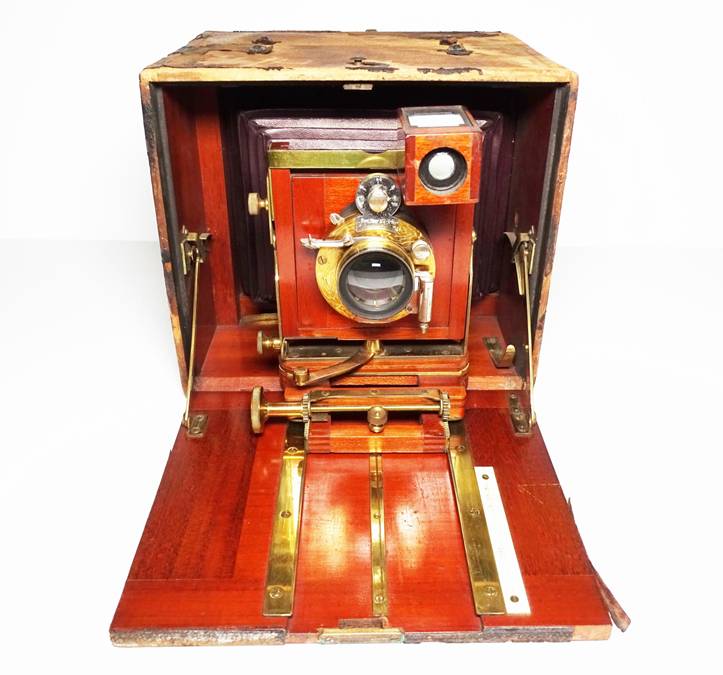 At first glance, what appears to be a Henry Clay Camera, is in reality something else.  Research has yet to yield a model name, or evidence that it ever appeared in a factory catalogue or advertisement.  An 1898 Folmer & Schwing Catalogue exists, but I don't have access to determine whether this camera is included in it. Eventually, with some help from the collecting community, the correct name will be known.  Pending new information and based upon its believed origin, I've called it "Folmer & Schwing's Improved Henry Clay".

Mathias Flammang's relationship with American Optical, has caused some confusion as to whether this camera was manufactured by American Optical or the Flammang Camera Company for Folmer & Schwing.  However, based upon its construction and hardware, it appears that American Optical built the camera.  If so, it would represent the zenith in the full-size Henry Clay Camera's design, even though American Optical's Henry Clay would continue to be manufactured for another 3-4 years following this Folmer & Schwing version.  The following 1898 Flammang Camera Company advertisement, although somewhat later than the estimated timeframe for "Folmer & Schwing's Improved Henry Clay", mentions their line of "Zenith Folding Cameras".  Wouldn't that be a coincidence, if the two cameras turned out to be one in the same. 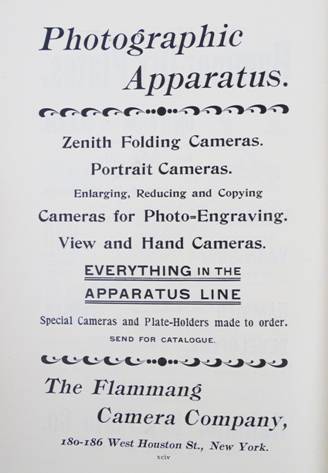 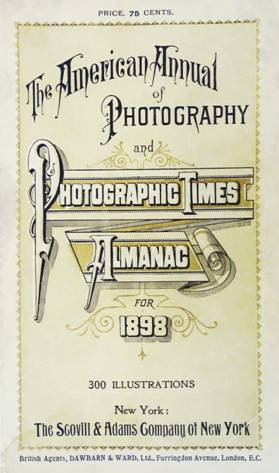 Per Rodger Digilio's article "Involvement of the Flammang Camera Company in the Manufacture of Cameras for Folmer & Schwing" in the Graflex Historic Quarterly, Volume 15, Issue 1, First Quarter, 2010, a 1912 letter from William Folmer to Rudolph Speth of Eastman Kodak states that in 1895, Folmer & Schwing contracted with Scovill and Adams to make a number of cameras to order that would represent an improvement over their then existing American Optical Henry Clay model.

The construction of the cameras shown here are very similar to American Optical's Henry Clay, the improvements being the lens standard and tilt adjustment, and the folding bed's struts which are hinged (as on the Henry Clay Regular and Stereoscopic Special Order models of 1896)  rather than one piece.  This improved lens standard is nearly identical to those found on the Irving Clay Camera, and the use of both Henry Clay and Irving Clay parts is evident. This example carries both the Folmer & Schwing (271 Canal St.) and Scovill & Adams labels.  Interestingly, Mathias Flammang, Superintendent of American Optical Company's Waterbury factory during this period, established the Flammang Camera Company in 1896 at 182-186 West Houston Street, New York.  Flammang also entered into an agreement to make cameras exclusively for Folmer & Schwing.

One example is equipped with a Simplex Shutter, manufactured between 1889-1893.  The barrel behind the shutter is marked Scovill & Adams. Although the latest advertisement found for this shutter is in Scovill's The American Annual of Photography and Photographic Times Almanac for 1893, Scovill & Adams' bargain list from 1896 had a 4x5 Henry Clay for sale with the Simplex Shutter.  This suggests that it was either "new old stock" in inventory for three years, or that the Simplex Shutter was still being offered beyond 1893. The other example is equipped with the first model of the Poco Shutter.

Factors considered in dating this camera

·      First model of the Poco Shutter (1895), found on the other example of "Folmer & Schwing's Improved Henry Clay" shown here, has an 1894 patent date and was manufactured in 1895, but disappears from Rochester Camera Company's catalogue in 1896.

Putting this all together, the Irving Clay was introduced in 1896, with its particular lens standard hardware.  Also in 1896, the Henry Clay Stereoscopic Special Order and the only known Henry Clay Regular 4x5 (in a private collection) both have hinged bed struts.  Other than the original Henry Clay sliding-bed model and one Henry Clay example equipped with a Mathein Shutter (believed to date to 1895), all other pre-1896 and post-1896 Henry Clay examples in my collection, as well as others I've encountered, were equipped with solid bed struts.  This seems to suggest that American Optical was either experimenting with or using hinged struts in lieu of the solid struts around 1896. For unknown reasons, they reverted back to solid struts for the duration of production. The shutters found on both examples of "Folmer & Schwing's Improved Henry Clay" shown here, fall within the 1895-1896 range, the Simplex possibly earlier. This all seems suggests that both these examples of the "Folmer & Schwing Improved Henry Clay" were built about 1895-1896.

As can be seen, both examples featured here are almost physically identical, other than the position of the viewfinders and that one has a hinged bed strut with the other having a solid bed strut.  One camera is marked with both company's names, and the other is unmarked. 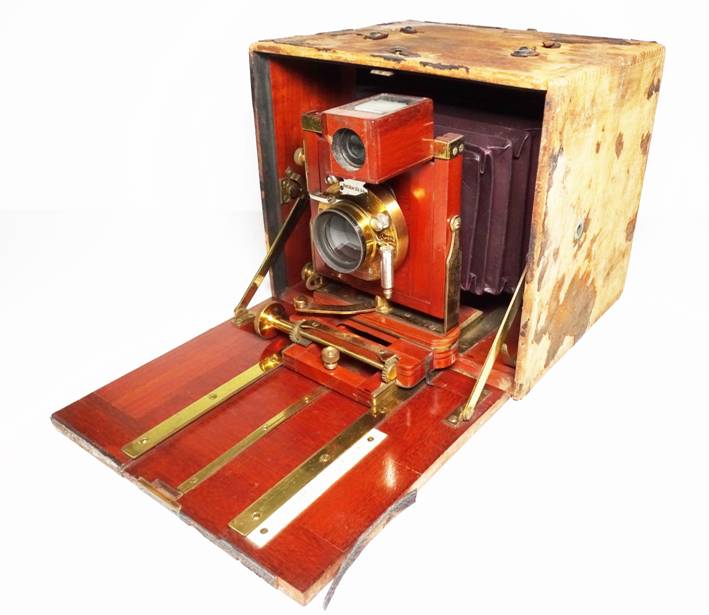 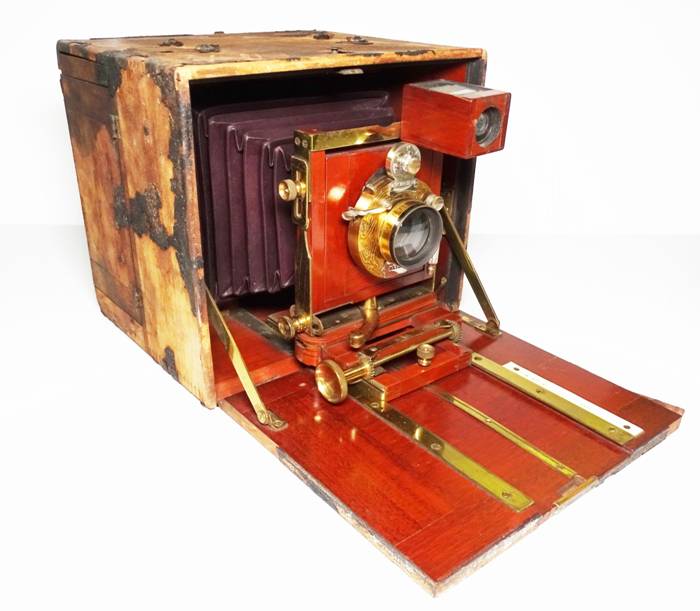 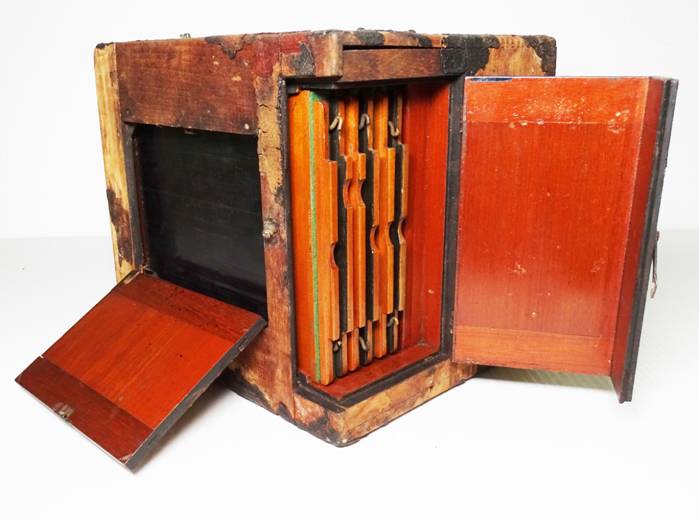 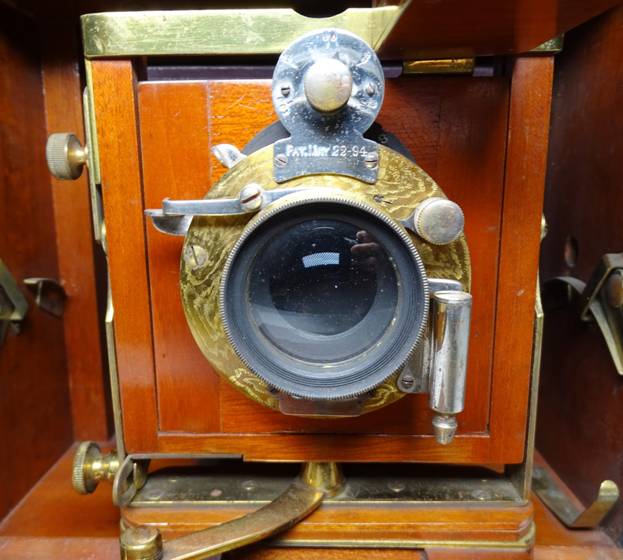 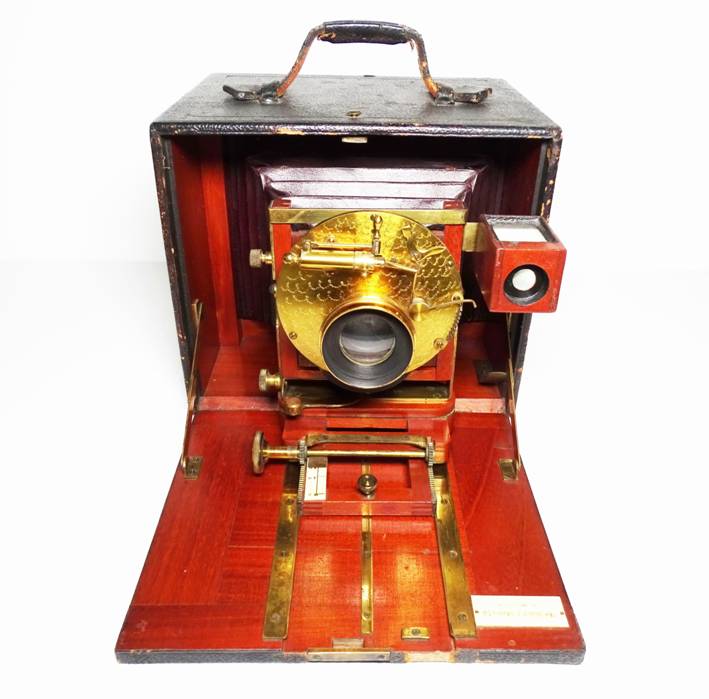 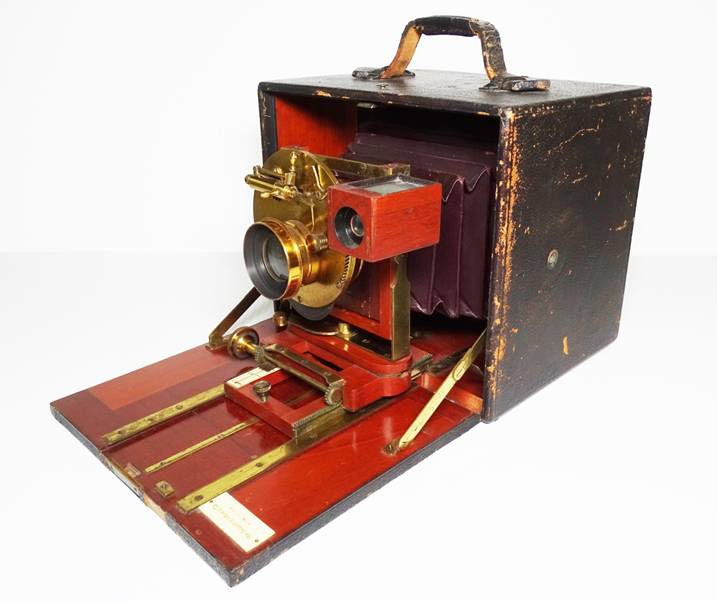 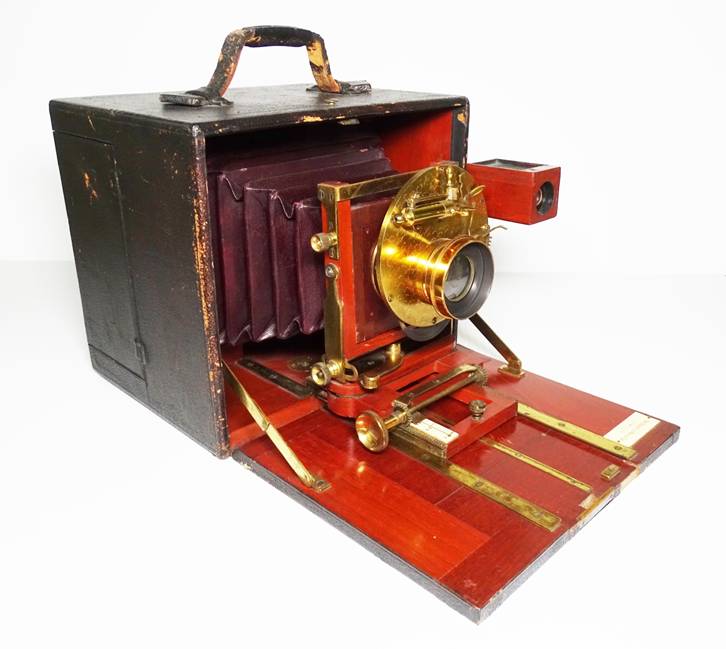 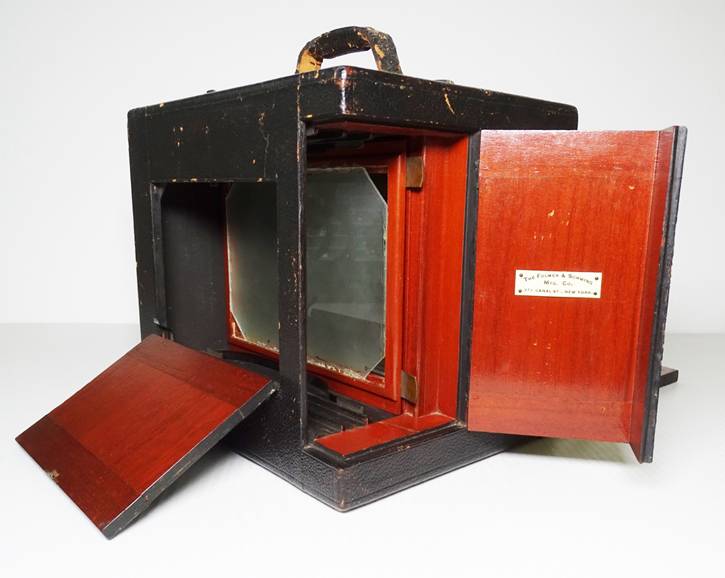 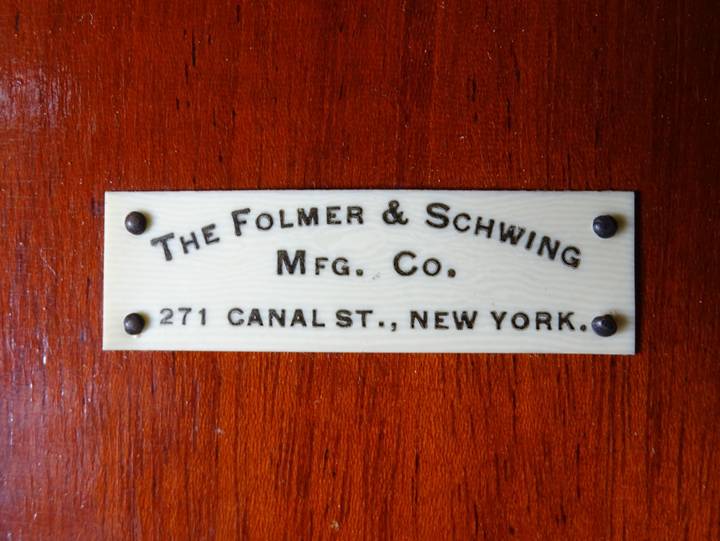 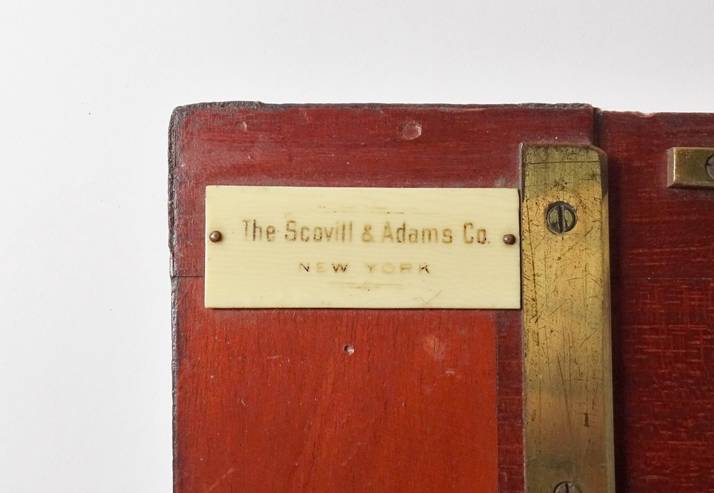 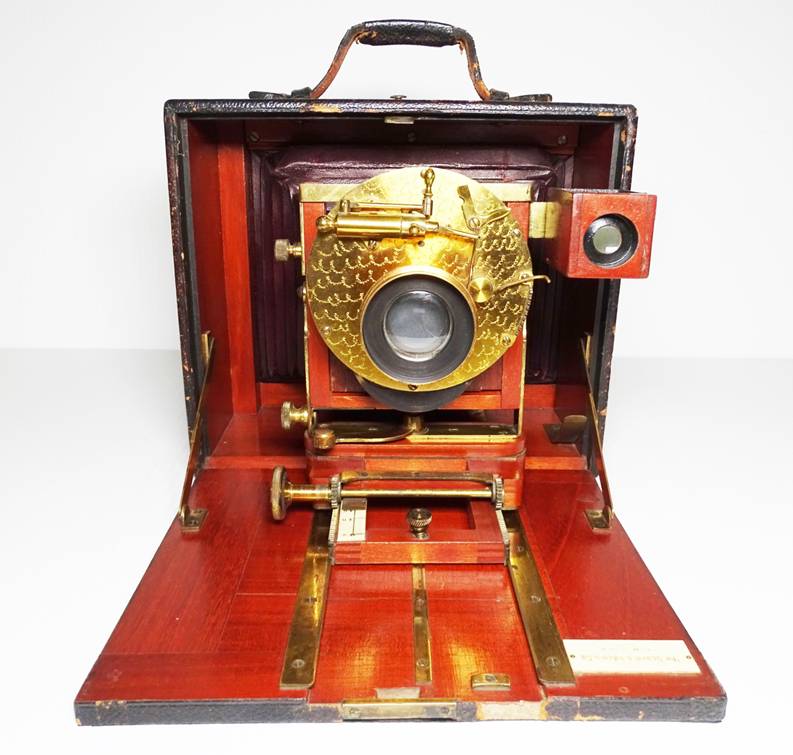 This "Folmer & Schwing's Improved Henry Clay" with the Simplex Shutter, appeared on eBay over the course a year or more.  Being more interested in the shutter, I assumed the camera was a Henry Clay.   After acquiring it, I realized it wasn't the Henry Clay we collectors associate the name with, and I began some research.  I also realized, that a near identical camera in my collection previously believed to be an Irving-Clay in an unknown 5x7 format, was this same camera.  Its identification as an Irving-Clay, was based on its similar lens standard hardware.

What I learned cleared up the misconception, opened up a whole new side to the Henry Clay story, and provided a better understanding of the relationships between Mathias Flammang, Folmer & Schwing and the American Optical Company.