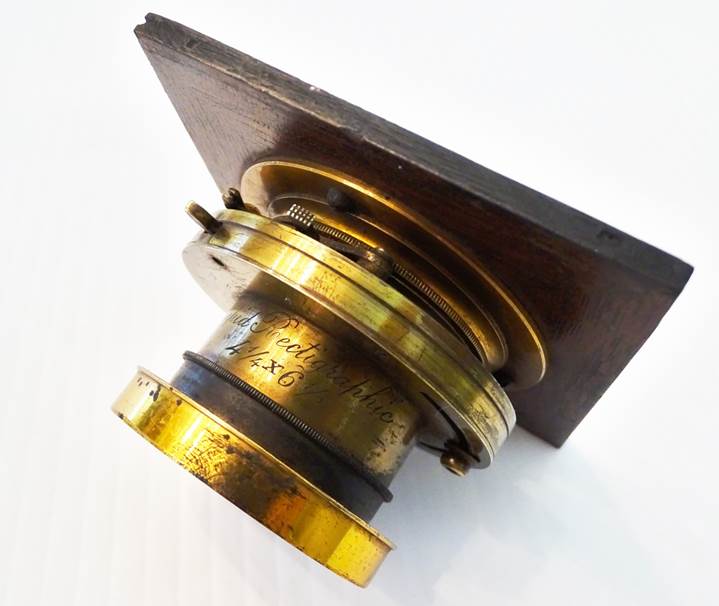 This unidentified model is believed to be one of Gundlach Optical Company's later shutters, most likely manufactured during the mid-to-late 1890's based on its design.

This inter-lens shutter is equipped with a Rapid Rectigraphic 4-1/4 x 6-1/2 lens, the barrel containing "Pat Dec. 9-1890".  This is in reference to Patent No. 442,251 for an element grouping designed to reduce chromatic aberrations: 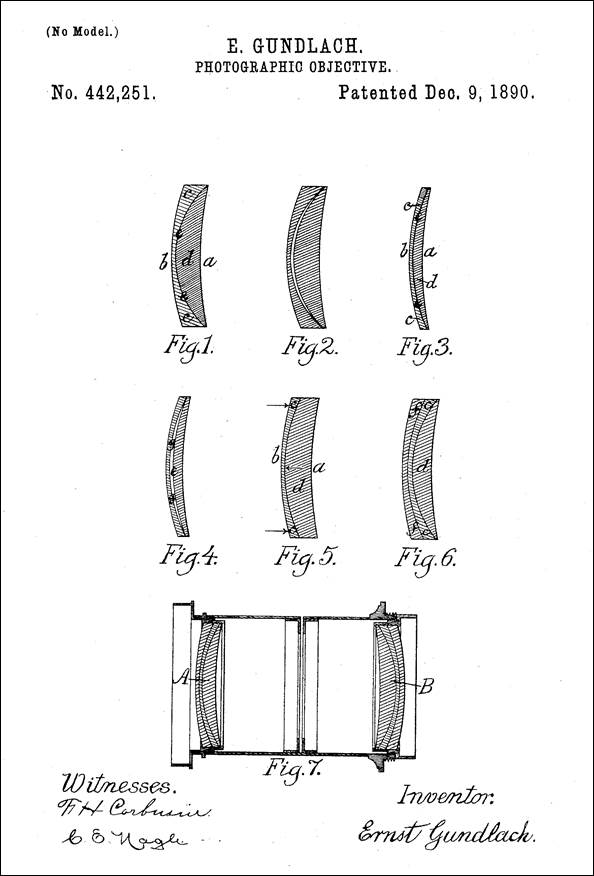 The patent was granted to Ernst Gundlach, a former employee of Bausch & Lomb who would later establish the Gundlach Optical Company in 1884.  Gundlach formerly specialized in microscopes and microscope objectives, and around 1884, began to pursue lens manufacture. The Rapid Rectigraphic, detailed in Gundlach's Illustrated Catalogue of Photographic Lenses, Etc., Sixth Edition, June, 1891,  was Gundlach's top-of-the-line landscape lens. The two curved shutter blades are also characteristic of late 1890's shutters,  differing from the two straight-edged blades found on the Gundlach Shutter, Time & Instantaneous of 1891, and on Gundlach's New Photographic Shutter of 1895. 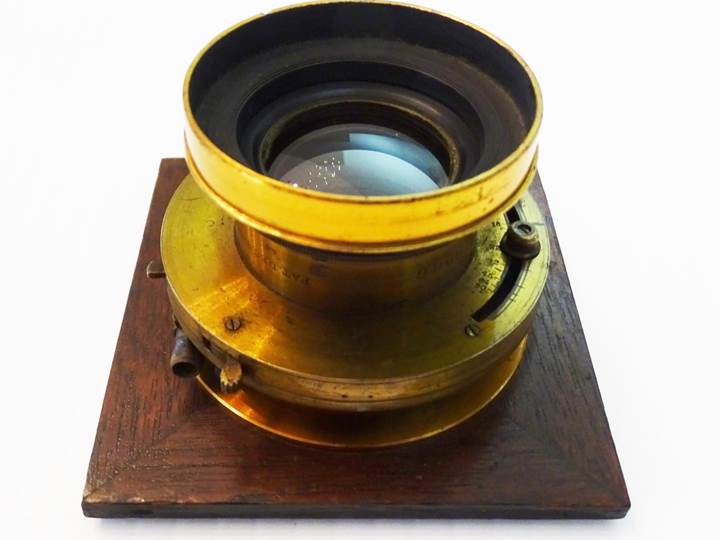 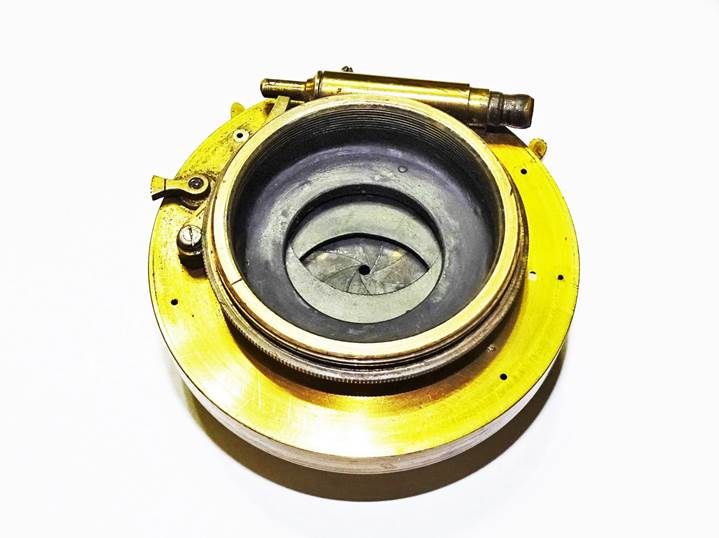 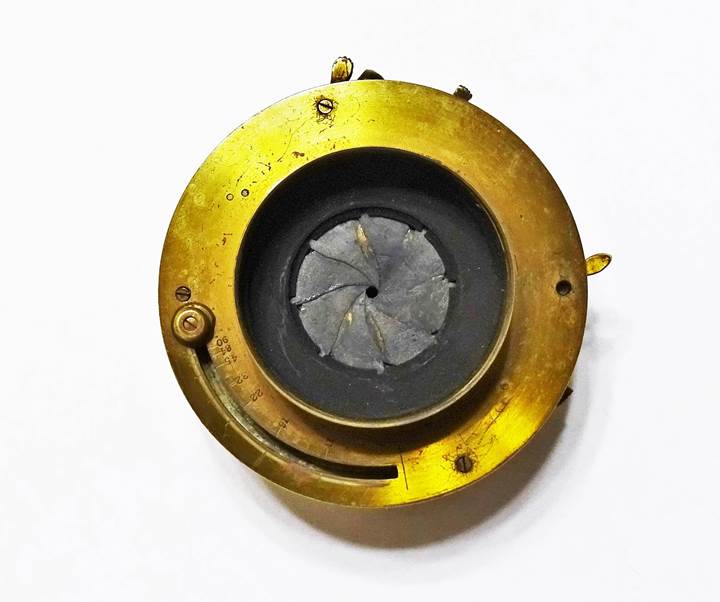 Ernst Gundlach left Gundlach Optical in 1895, establishing a new firm, the Gundlach Photo-Optical Company.  Gundlach retained the rights to his December 9, 1890 patent, covering designs for his Rapid Rectigraphic and Perigraphic lenses. It's a mystery as to what lenses or shutters he subsequently produced, as few ads for Gundlach Photo-Optical Company are seen. When encountered, the ads are devoid of model names or engravings and provide little insight.

As a result of the shutter's installation within the barrel, the manufacturer's name has been partially concealed (or destroyed).  What appears to be "Optical Co." is seen in Gundlach's typical script, and Gundlach Optical Company is presumed to be the maker.  A serial number of 5966 is seen on the forward barrel section, along with what appears to be "Front Lens 14-3/4". The rear barrel section contains "Equivalent" and the rest is undetermined.  Although not always the case, the four-digit serial number suggests this to be a later lens, and probably a later shutter as well.  Gundlach's Rapid Rectigraphic lenses have been seen on Ilex General shutters into the early 1920's

This is the only example of this shutter I'm aware of, and as Gundlach shutters go, it can be considered among their rarest. 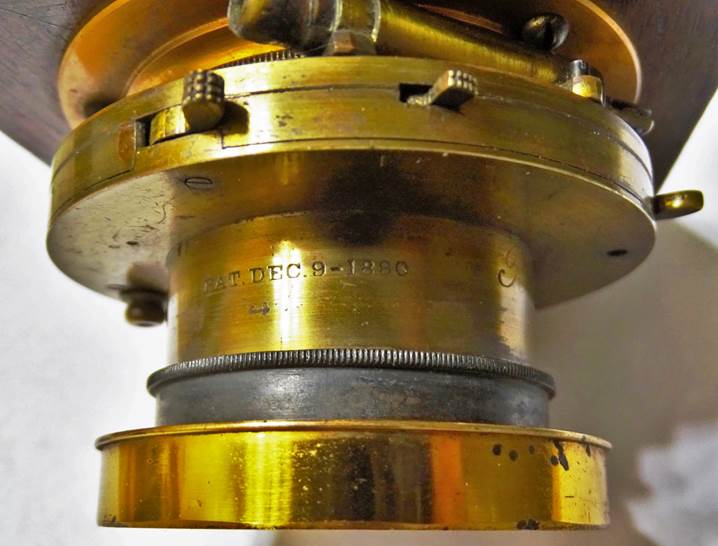