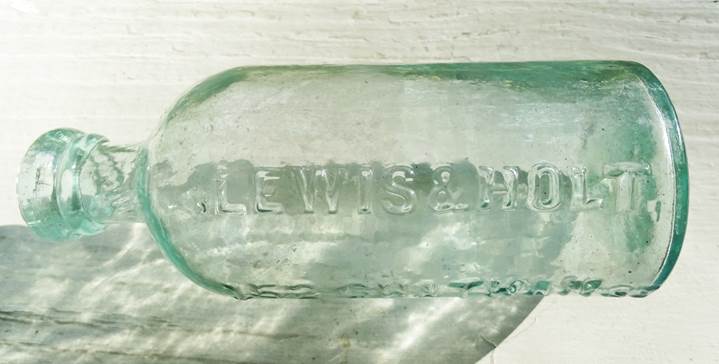 Lewis & Holt's Collodion was advertised during the late daguerreian/early wet plate period for the making of positives and negatives.  Per Craig's Daguerreian Registry, Richard A. Lewis opened a studio in New York, reportedly as early as 1839, eventually moving his gallery to 152 Chatham Street in 1860.  Lewis, who had already established himself in the manufacture and distribution of other photographic supplies, partnered with Holt of whom little is known. Lewis was the son of W. Lewis Sr., half of the celebrated W. & W.H. Lewis firm that manufactured early photographic apparatus.

Without its label, this aqua-shaded bottle with the name "Lewis & Holt, 152 Chatham St N.Y." molded into the glass, could have held other photographic chemicals.  However, it is identical to a known example of a Lewis & Holt's Xyloiodized Collodian for Ambrotypes bottle, having a label with a 160 Chatham Street address and the bottle itself having a molded 152 Chatham Street address.  Based on this and surviving advertisements, this bottle most likely dates to the 1860-1871 period.

The bottle is in outstanding condition, showing a few bubbles and imperfections normally associated with glass manufacturing processes of the time. The bottle measures approximately 2-3/8" wide by 6-1/8" tall.