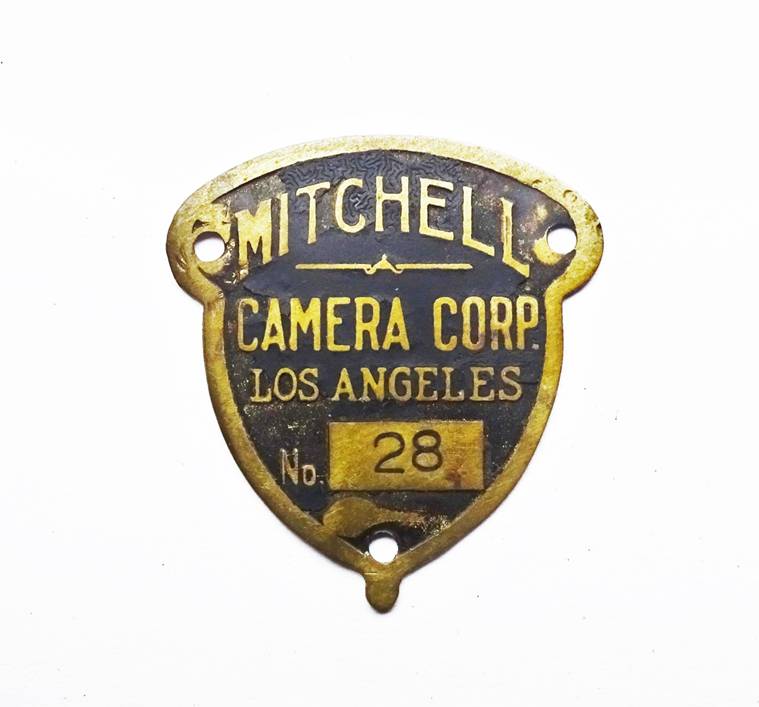 This Mitchell Camera Corporation factory tag may possibly be from Mitchell Standard Camera No. 28. If so, the tag would date approximately to the 1923-1924 period.  This is supported by the tag having a "Los Angeles" address, by the Mitchell name having changed in advertising from a company to a corporation by May,1923, and that a later documented camera, Mitchell Standard No. 50 dates to March 12,1925.

There is also the possibility that the tag is from a side-finder, a magazine or any number of Mitchell accessories. In this case, the tag would roughly date to somewhere between 1923 and 1929, after which Mitchell moved from Los Angeles to West Hollywood.

In 1921, Mitchell's address was 6025 Santa Monica Blvd., Los Angeles. In February, 1929, Mitchell broke ground on their new factory at 661 Robertson Avenue, West Hollywood, with a plan to move all equipment there by October 1, 1929.   By late 1929 or early 1930, one would think that Mitchell tags would have transitioned to the new West Hollywood address.  However, according to some Mitchell historians, there is some evidence that this change in the tag address didn't happen until about 1933 or 1934. There may be some merit to this given that the Los Angeles address continued to be shown in Mitchell catalog illustrations until at least November, 1937.  This was well after their move to West Hollywood, suggesting that maybe Mitchell was in no hurry to update their name tags or their advertising to reflect the new location.

By early 1946, the factory moved to Glendale, California, which is the name seen on most surviving Mitchell equipment.

Today, anything Mitchell having a Los Angeles address is very hard to come by.