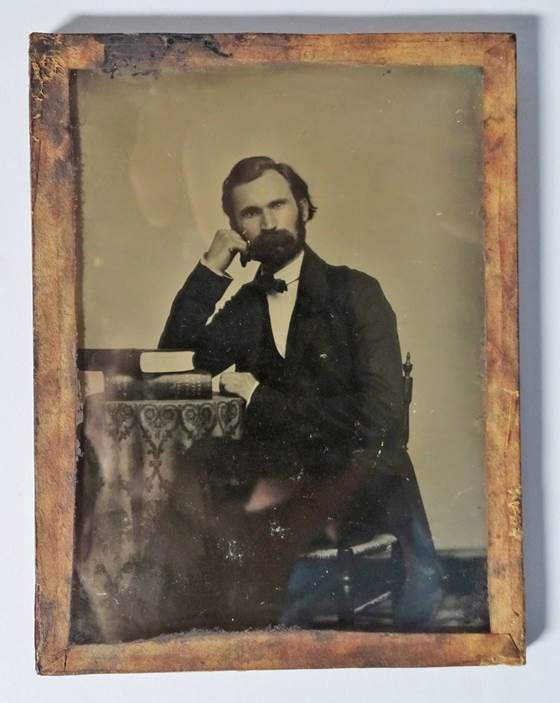 This quarter-plate ambrotype has both a front and rear glass plate, held together with its original preserver (taped edges) to seal and protect the image.  Although undated, a book resting on the table is titled "Patent Office Record 1855".

This is the first image I ever purchased, and it really represents the dawn of my interest in photographica.

I came across this image at a local drive-in theater one weekend.  Being on glass, it instantly drew my attention and appeared to be very old.  But its $7 price tag seemed a bit high, and I passed on it. Over the following week, I couldn't stop thinking about it and went to the library to learn more.  Coming across Robert Taft's Photography and the American Scene, I quickly realized it was an ambrotype and kicked myself for not buying it.  I mean after all, it was probably from the 1860's and it was really old, even in the 1970's.

Well, the week couldn't pass fast enough, so I could go back the following weekend to see if it was still there.  To my disappointment, the space where the vendor had been set up was vacant.  I asked the man in the next space, and he said "he didn't do very well last weekend" and wouldn't be back.  However, he did go on to say that he bought him out, and asked if I was interested in something particular.  I described this "picture on glass", and he thought he still had it.  After a few minutes, he retrieved it from a box and let me have it for $4.

I learned a lot from this experience.  Never pass up something that really intrigues you, and make efforts to learn more about whatever interests you.  Like all of us, I've had good, bad and regrettable experiences.  But I always recall this one with fondness, not just for the way it turned out, but because it was the beginning of a great journey.