With no advertisements or references found in camera or photographic supplier catalogues, I've called it the Slayton Shutter based upon its inventor, and attributed its manufacture to him pending more information. The example shown here with a casing diameter of 5" is mounted on a Rochester Camera and Supply Company Tele-Photo Cycle Poco C Triple Extension 6-1/2 x 8-1/2 camera which was introduced in 1900: 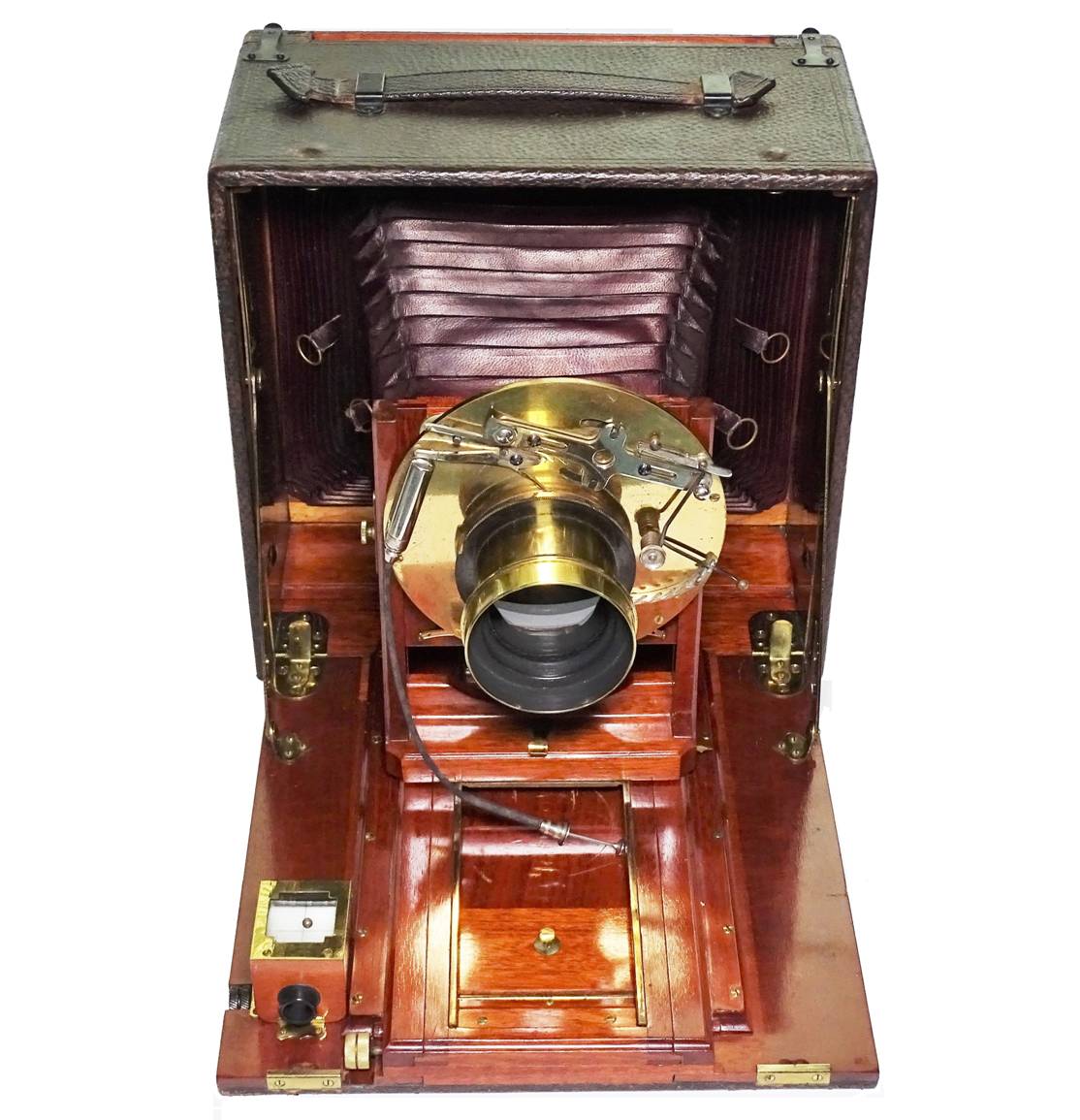 This two-blade time and instantaneous shutter was designed by Samuel Slayton of San Francisco, California, Patent No. 546,198 being granted to him on September 10, 1895. Some of the shutter's attributes identified in the patent's wording, were that its holding and locking mechanism was positive, the tripping mechanism was delicate and that its operation was "comparatively noiseless and without jar".

The only references found so far, were in regards to issuance of the patent which was noted in The Photographic Times: An Illustrated Monthly Magazine Devoted to the Interests of Artistic and Scientific Photography, Volume XXVII, No. 5, November, 1895, where it was described under the "Photographic Patents" section, in the Official Gazette of the United States Patent Office, 1895., and in the Annual Report of the Commissioner of Patents for the Year 1895.  I've yet to find a review in any photographic journals of the period.

At this point, little is known of Samuel Slayton who was listed as a "photo instrument mkr" at 206 Stevenson, with a residence at 554 46th Avenue in the Crocker-Langley San Francisco Directory for the Year Ending August, 1912.  The San Francisco Call for June 17, 1906 contains a classified ad for "S. Slayton, practical photographic instrument maker and repairer; established 1890; photographic apparatus of every description made to order. 552 46th ave., bet. Pt. Lobos ave. and A st.". The 1900 U.S. Census lists Samuel Slayton age 43, born March, 1857, at 358 Geary Street with his occupation as "Carpenter". The 1910 U.S. Census lists Samuel Slayton age 53, and his wife, Bertha 44, with a 554 residence number, his birthplace as Vermont and his occupation as "Camera store". By 1920, the U.S. Census indicates Slayton is retired. Birth and death records on Ancestry.com indicate Slayton was born March 4, 1858 in Woodstock, Vermont to Truman and Lucy Slayton, and died November 28, 1923 in San Francisco, California. 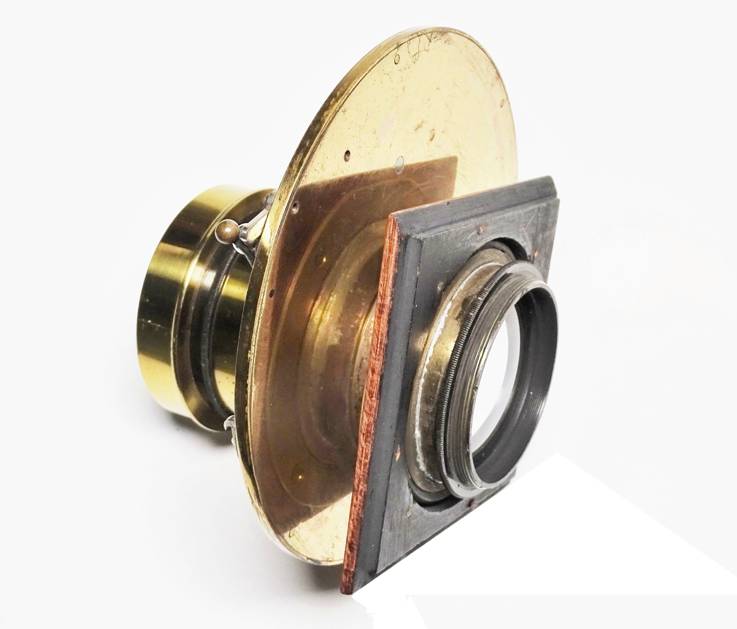 Among the shutter's most notable features is the tension spring, which is similar to those found on Prosch shutters, such as the Triplex: 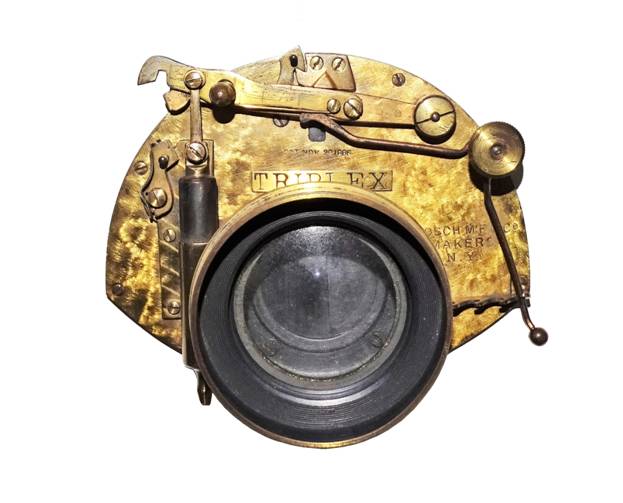 Slayton's shutter bears no maker's name, numbers or other markings. Comparing it against his patent drawing, the linkage differs slightly and the originally conceived coil spring has been replaced with the Prosch-style tension spring.  However, the essence of the shutter's design and its operation are evident.

The lens, which was sectioned to mount the shutter between the front and rear elements, bears remnants of the name "R. & J. Beck". It's equipped with an iris aperture, adjusted via the black knurled ring located just forward of the barrel mount. It's unknown whether the shutter was initially built for use with factory installed front and rear elements (and if so, whether it would have been equipped with an iris aperture or Waterhouse stops), or whether it was intended for use as seen here, mounted within a buyer-supplied lens as in the case of Benster's Patent Diaphragm Shutter:

Research may reveal more about Samuel Slayton, whether he actually manufactured the shutter, and for how long. Slayton, by virtue of his advertised occupation, most likely had the machining skills necessary to build it. Another possibility is that he secured the patent, but without the tooling, equipment and resources required for mass production, he engaged one of the larger photographic companies to manufacture it. The quality of its construction does seem indicative of this, but in an era where essentially everything was hand-made, conceivably, it could have been built by a much smaller shop.

With Slayton having applied for his patent on December 27, 1894, and with this example found on a camera dating to 1900-1903, the shutter's manufacturing timeline is potentially rather broad. Certainly, an earlier shutter could have been mounted on a later camera, and despite the shutter being designed in late 1894, with the exception of a prototype it may not have reached production until years later. I would speculate, that with its Prosch-like style of construction which was on its way out by the turn of the century (Prosch's Diaplane series being the anomaly), the Slayton would place more towards the mid-to-late 1890's. But for now, I'll say circa 1900 until more is known.

With little information found and this being the only example I've seen, I can only presume that very few Slaytons were ever made. As far as American shutters go, it can easily be considered very rare.

My Thanks to Antony D. Manthos for identifying the Slayton Shutter's patent.

For more information on Prosch Shutters and the Benster Patent Diaphragm Shutter, look for them under the "Shutters" section of this website.