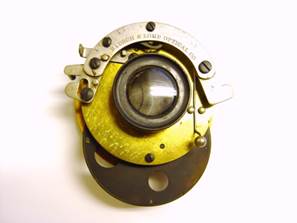 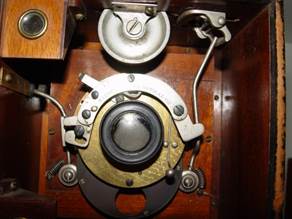 Referred to here as the Sunart Magazine Camera Shutter (actual model name unknown), the shutter appears to have been a modified version of either Bausch & Lomb’s second model Unicum of 1893 or an early version of their Star Shutter introduced in1894.  Fitted for use in the Sunart, it was capable of being reset without exposing the film for either time or instantaneous exposures.

We have never encountered this shutter on any other camera, except the Sunart Magazine.

Sunart's Magazine Camera appears to have been offered over the Sunart Photo Company's existence from 1893-1899.  Mention is made of the Sunart Magazine, in comparison to the R. & J. Beck Frena, in the Photo-Beacon, Vol. VI, No. 55 for July,1893.  Whether the Sunart's unique shutter was still used in later models is open to conjecture.  Sunart's 1899 catalogue doesn't specify or illustrate the shutter, and not many examples survive from which to make a comparison.

Sunart's Magazine Camera is almost never seen today, and by default, its shutter as well.