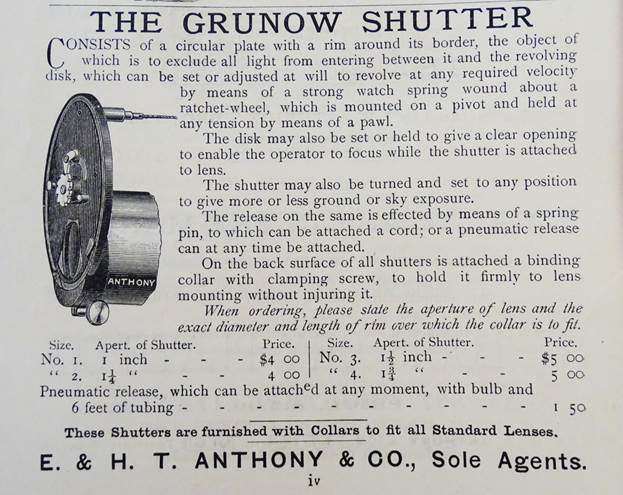 Other than advertisements found in E. & H.T. Anthony's catalogues, kittle is known of the Grunow, a rotary-style shutter designed to mount on the front of a lens barrel.

A firm operating under the name "Grunow Brothers", begun by Julius and William Grunow, was probably the second microscope manufacturing company to be established in the U.S. In 1863 they moved from New Haven, Connecticut to New York.  By 1874 the firm became "J. Grunow. They produced the Riddell binocular microscope and early inverted microscopes. Reference to several products in Behrens The Microscope in Botany and the Journal of the Royal Microscopical Society may help to establish the firm's longevity:  Grunow's No. 2 Student Stand (1885), Riddell's Binocular Microscope (1885) and Grunow's Physician's Microscope (1887).  It's not known how long they remained in business, whether their firm's existence coincided with the Grunow's production or whether this firm is connected in any way to the Grunow Shutter. No patents for the Grunow's design have been found so far.

Anthony's advertisements for the Grunow don't refer to a manufacturer, but do indicate Anthony as the sole agent.  In The Scientific American Volume XX for July-December, 1885, under a section titled "The Recent Convention of Photographers at Buffalo, New York - Exhibition of Photographic Novelties", the following report appears:  "Messrs. W. H. Walmsley & Co. of Philadelphia, Pa., exhibited a new rotary snap shutter which was placed on the end of the lens tube.  A circular rotary plate, with an aperture in it to match the lens tube, was propelled at its axis by a flat coiled spiral spring, in front of a stationary plate, which was secured to the lens tube.  When the rotary plate was released, by a simple trigger or pneumatic device, its aperture rapidly revolved past the lens tube, making the exposure; after passing the aperture the plate, instead of coming to a quick stop, was constructed to ride up on a metal incline arranged on the periphery face of the circular stationary plate.  In this way, the jar which usually accompanies such shutters was avoided.  Suitable mechanism was arranged to increase or decrease the tension on the spring, and thereby vary the speed of rotation".

This statement appears to describe the Grunow Shutter, based on the Grunow's unique construction, the fact that no other known American shutters of the period were similarly constructed and that it coincides with the shutter's appearance in Anthony's 1886 Photographic Bulletin.  It also suggests that W.H. Walmsley either manufactured, had manufactured or imported the shutter, and then supplied it to Anthony, its Sole Agent.

The box shown below with an E. & H.T. Anthony and Company label, is believed to be for the Grunow. It measures 6-3/4" x 5-1/2" x 1/5/8".   Absent of any name, the label does makes note of "set the shutter before winding the spring up".  The only winding-type shutter I'm aware of, that was sold by Anthony and might fit this box, is the Grunow.  The advertisement shown above from Anthony's Photographic Bulletin for November 27, 1886, portrays the shutter to be shallow enough to fit such a box and refers to a "coil spring".  Other barrel-mounted shutters marketed by Anthony, such as the Nonpareil and the Hadden, are shallow in depth but do not wind up.

I'm unaware of any examples of the Grunow, which can be considered extremely rare.  If this is the original box for the shutter, it could be argued that the box is equally rare, if not rarer.  Original boxes for most vintage shutters are hard to come by, as the majority were discarded. 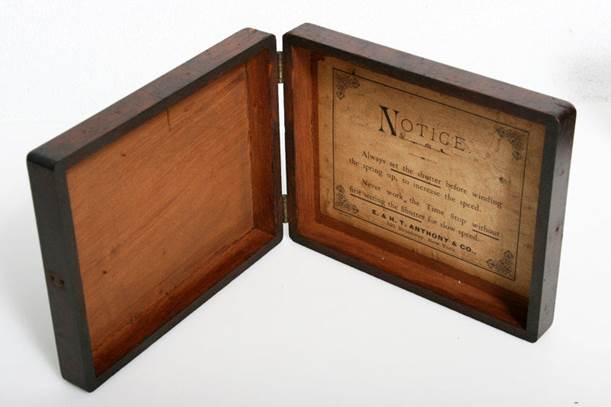 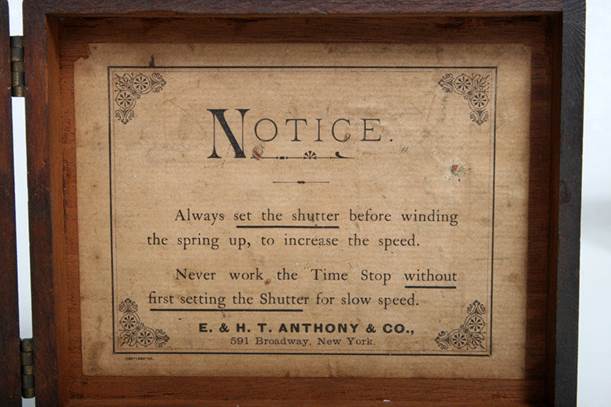