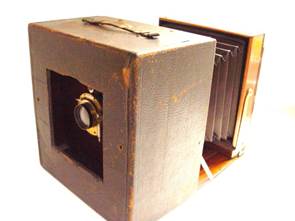 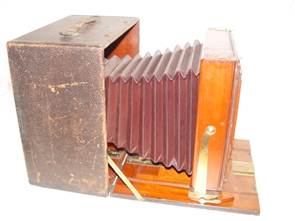 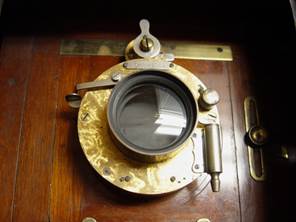 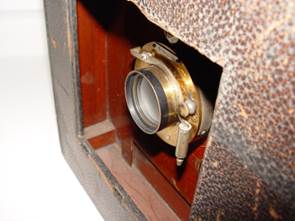 With similar hardware and a period Gundlach shutter, this whole-plate self-casing camera has all the earmarks of a Rochester Camera Company product.  But the camera bears no name or other markings.

It's Gundlach Optical Company Shutter & Iris Diaphragm, patented May 22, 1894, has been found on many self-casing cameras of the 1896-1898 period.  However, beginning with the parent company Rochester Camera Manufacturing and continuing through Rochester Camera & Supply, many of their cameras were equipped with Gundlach shutters.  This is in contrast to Rochester Optical Company, which appears to have used Bausch & Lomb and Prosch shutters exclusively during this period.

Among the camera's unique features, is the back which folds down to form the bed, instead of the front as normally encountered.  The plate-holding frame tracks backwards as in a long-focus camera.  Also, the front door looks more like a back door that would have facilitated focusing on a typical self-casing camera.  Although the door is missing on this example, it would have opened to reveal the hidden shutter mounted on a lens board with rise and fall adjustments. The construction and build quality suggests that the camera is factory original.

The only similar camera we have located from this era, is the New Eagle View Camera that was marketed through George Murphy in 1898. Although  resembling it in format and construction, the hardware between the two cameras differ and the New Eagle's main body appears to be significantly smaller.

If anyone can shed some light on this interesting piece, please let us know!