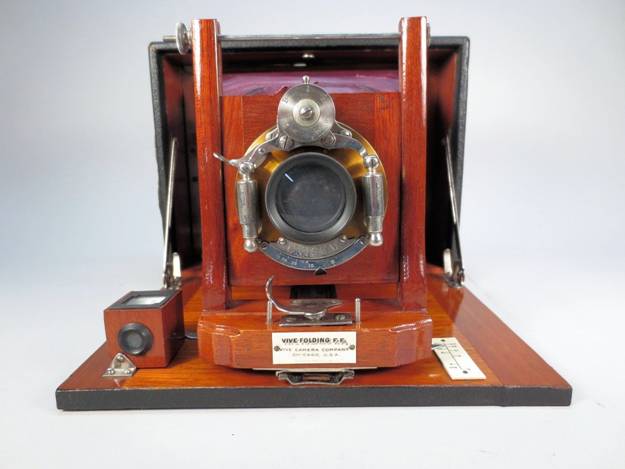 Like a number of cameras during this period, the Vive Folding F.F. exists in advertisements, but is almost never encountered.  I've yet to determine what the "F.F." stands for, and other models of Vive's self-casing cameras have been found with similar double letter designations.

Apparent in its construction and evidenced by company stampings found on some rear doors, the camera was manufactured by Gundlach Optical Company for Vive, most likely during Ernst Gundlach's brief association with the Vive Camera Company around 1898.  Ernst Gundlach left Gundlach Optical in 1895, forming the new Gundlach Photo-Optical Company that was eventually re-named Ernst Gundlach, Son and Company.  Leaving that firm in 1898, it's not known what connection if any, Ernst Gundlach may have had with his original firm in producing the Folding F.F.  Carrying the Vive label, the camera is nearly identical in all respects to Gundlach's Korona Series II-A.  The Folding F.F. represents yet another instance of private branding, a practice employed by numerous manufacturers and distributors during the mid-to-late 1890's.